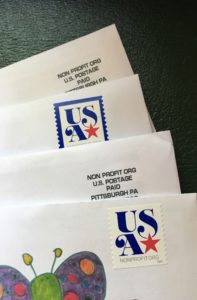 Last week, we looked at how I edited the opening of a good thank you letter to make it better. This week, we’ll look at the body of the letter and how to describe organizational accomplishments in donor-centered terms.

In donor-centered fundraising, it’s not about your organization, it’s about the donor. Your organization is the way the donor fulfills their desire to change the world, so you want to show how they did that. That means giving up the standard “Organization X did Y” construction and replacing it with statements that make the donor the driver of the accomplishments.

Here’s how I took the Catholic Nonprofit*’s thank you letter and edited the body text to make its accomplishments statements more donor-centered.

At our Albuquerque conference, we successfully marched with Strong Families New Mexico and their members in solidarity to protest the state’s unjust laws that affect families with limited resources.

You have promoted equality and dignity for LGBTQI individuals through the inspired collaboration of the Social Justice Coalition. You have aided and helped to organize church workers who suffered injustices at the hands of their employers. You have mounted an impressive display of solidarity at our Albuquerque conference as Catholic Nonprofit members marched side-by-side with Strong Families New Mexico to seek justice for families with limited resources.

In this draft, the donor is the agent, making all of the accomplishments happen. Generally, all I had to do was replace the organization/“we” with the donor/“you.” In some cases, the donors we’re writing to may have literally provided hands-on assistance. In other cases, they may have “only” provided financial support. However, in both cases, it’s accurate to give them credit because the organization certainly could not continue these programs without income from gifts and contributions.

Using “you have” three times in a row doesn’t hurt, either. This rhetorical technique emphasizes the donor’s role through repetition.

*I redacted the organization name and use “Catholic Nonprofit” in its place.